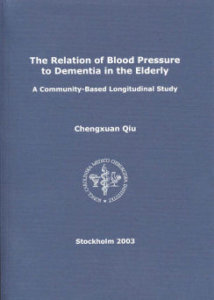 This doctoral thesis concerns a community-based, prospective study aimed at investigating the complex relationship between blood pressure (BP) and risk of dementia in a dementia-free cohort (n = 1301) aged >75 years in Stockholm, Sweden. After baseline survey (1987-1989), the cohort was followed for over 6 years, during which 2 waves of clinical examinations (1991-1993 & 1994-1996) for dementia and Alzheimer’s disease (AD) (DSM-III-R diagnostic criteria) were performed. Data were analyzed with Cox proportional hazards models. The major findings from the five research papers included in this thesis are summarized below.

In Study IV, we found that systolic and diastolic levels greatly decreased over 3 years before a dementia diagnosis and continued to decline thereafter. Diastolic BP decline was not significantly predictive of dementia, whereas a greater decline in systolic BP (>15 mm Hg vs. no decline) was statistically associated with an elevated risk for AD and dementia among persons with systolic pressure level <160 mm Hg or those with vascular disease at baseline.