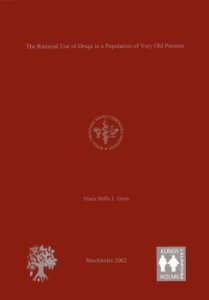 This thesis investigated the use of drugs in a population of very old persons. The pattems of use, particularly of psychotropic drugs, and its appropriateness were assessed. Drug use was also assessed according to dementia diagnosis and in relation to the presence of psychiatric illnesses. Inasmuch as there is extensive literature on drug use in older persons, data on the very old is scant. The Kungsholmen project, a longitudinal population-based study on aging, provided us with the opportunity to examine the use of drugs in this group of older persons.

There was a high rate of the use of drugs, in general, and psychotropic drugs, in particular, in this very old population. Drug use was more among women and in institutions. The most commonly used were drugs for the cardiovascular system, nervous system, and alimentary tract and metabolism. There was an increase in the use of drugs for the most common diseases affecting the older population.

More persons with dementia used psychotropic drugs, particularly antipsychotics. Persons without dementia, on the other hand, more commonly used hypnotics-sedatives. Questionable prescribing was evident in the use of multiple psychotropic drugs and high level of longacting BZD use. There was underdiagnosis and undertreatment as shown in the low level of antidepressants used. Careful prescribing was noted in the use of SSRI, the transition to use short-acting BZD, and the generally lower doses taken.

Hypnotics-sedatives were commonly used for sleep problems, depression, and anxiety in persons with dementia and anxiolytics were used for psychosis. The heterogeneous nature of a behavioral disturbance was seen in the manner with which drugs were used relative to the presence of a particular BPSD. This was evident in the different types of psychotropic drugs used for a particular BPSD. There was an increase in the proportion and type of psychotropic drugs used with increasing severity of dementia.