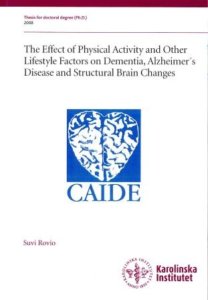 Dementia is one of the major public health concerns and its impact is increasing rapidly in aging populations. Recent research has suggested that the origin of dementia and Alzheimer´s disease (AD), which is the most common form of dementia, is multifactorial including both genetic and environmental factors. Several vascular and lifestyle related factors have been associated with the risk of dementia but the results remain conflicting, especially concerning physical activity and other lifestyle factors. The present thesis project aimed at obtaining a comprehensive understanding about the role of physical activity in the development of dementia and AD, taking into account other lifestyle related and vascular factors and possible gene-environment interactions. More specifically, the effects of different types of midlife physical activity (i.e. leisure time, commuting and occupational), and also the possible interactions and combined effects of physical activity, other lifestyle factors (dietary fat intake, alcohol drinking and smoking) and the apolipoprotein E (apoE) epsilon4 allele for dementia and AD were examined. Finally, the associations between midlife leisure time physical activity and structural brain changes including brain volumes and white matter lesions (WML) detected on magnetic resonance imaging (MRI) later in life were studied. This thesis project was based on the Cardiovascular Risk Factors, Aging and Dementia (CAIDE) study. The participants of the CAIDE study were derived from four separate independent population based random samples previously studied in midlife in 1972, 1977, 1982 or 1987. Approximately 21 years later a random sample of 2000 persons, aged 65-79 years and living in two geographical areas in Kuopio and Joensuu in Eastern Finland, were invited to participate in the re-examination. Altogether 1449 persons (73 %) participated. A subpopulation (n=91) of the CAIDE participants was also MRI scanned. Study I. Persons who participated in leisure time physical activity at least two times a week in midlife were found to have an approximately 50% lower risk for dementia and 60% lower risk for AD than the more sedentary persons. The associations remained unchanged after adjustments for a wide range of vascular and lifestyle related factors, and were more pronounced among the apoE epsilon4 carriers. Study II. Neither occupational nor commuting physical activity at midlife was associated with the risk of dementia or AD later in life. Sociodemographic and vascular factors or the apoE epsilon4 allele did not modify the effects. Study III. The effects of the lifestyle related factors assessed in midlife (i.e. physical inactivity, dietary fat intake, alcohol drinking, and smoking), and the composite effect of them were all found to be more pronounced among the apoE epsilon4 allele carriers. Study IV. Midlife leisure time physical activity was found to be associated with larger cerebral grey matter and thereby total brain volume later in life, while it was not found to influence either subsequent white matter volume or WML. In summary, regular leisure time physical activity and other healthy lifestyle choices in midlife may be protective against dementia and AD later in life, and the benefits may be more pronounced for the apoE epsilon4 carriers. Work-related physical activity was not found to be sufficient to protect against dementia. Duration and intensity of physical activity may play a role, but the lack of the effect may also be partly due to residual confounding. The putative protective effects of leisure time physical activity may not be totally conferred through vascular factors as midlife leisure time physical activity was also found to be associated with larger total brain and grey matter volumes. Thus, this study adds evidence that a healthy and moderate lifestyle already in midlife may increase the possibilities of enjoying both cognitively and physically vital years later in life.