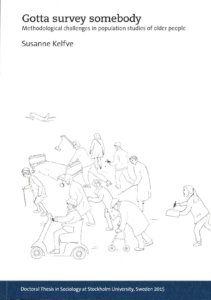 Conducting representative surveys of older people is challenging. This thesis aims to analyze a) the characteristics of individuals at risk of being underrepresented in surveys of older people, b) the systematic errors likely to occur as a result of these selections, and c) whether these systematic errors can be minimized by weighting adjustments.  In Study I, we investigated a) who would be missing from a survey that excluded those living in institutions and that did not use indirect interviews, b) how prevalence rates would be affected by these exclusions, and c) whether post-stratifying the data by sex and age (weighting adjustment) would correct for any systematic measurement error. In Study II, we compared mortality and hospitalization rates in those who responded to a postal questionnaire with rates in the target population. In addition, we tested whether a weighting variable created with a number of auxiliary variables could correct for the differences.  In Study III, we followed a longitudinal cohort sample for 43 years. By recalculating baseline characteristics at each follow-up, we investigated how the sample changed after a) selective mortality and b) survey non-participation. In Study IV, we investigated whether the systematic non-participation that is likely to occur in surveys of older people affects the association between education and health. In sum, the results of these four studies show that people in the oldest age groups, women, those of low socioeconomic position, and those with the poorest health tend to be underrepresented in surveys of older people. This systematic underrepresentation might lead to an underestimation of poor health and function, a bias that is unlikely to be corrected by weighting adjustments, and to an underestimation of health inequality between educational groups. The results also show that the selective mortality that occurs in longitudinal samples might be compounded by selective non-participation among the most disadvantaged groups.