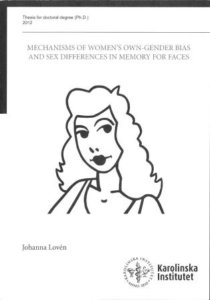 There are sex differences in some cognitive functions. For example, earlier studies have shown that women outperform men on face recognition tasks, and women, in contrast to men, show an own-gender bias (i.e., women typically recognize more female than male faces). In the present thesis, the role of puberty, sex hormones, and attention, as well as neural correlates of the sex difference and women’s own-gender bias in face recognition were investigated.

In Study I, the aim was to determine whether sex differences in cognitive abilities are magnified during early adolescence (ages 12-14), as a function of differences in age, hormone levels, and/or pubertal development. The results showed that boys’ advantage in mental rotations and girls’ advantage in verbal fluency, verbal episodic memory, and face recognition memory were not magnified during this age period, and were not modulated by pubertal maturation or levels of sex hormones.

In Study II, we investigated whether the female own-gender bias in face recognition could be explained by women encoding female faces more elaborately than male faces. The results showed that divided attention at encoding, which may hamper elaborate encoding, did not reduce the magnitude of women’s own-gender bias, but attenuated women’s advantage over men in memory for female faces. Whether the gender of a face influenced men and women’s visual attention and memory for own- and other-race faces, and whether viewing time influenced the own-race bias, was investigated in Study III. Women displayed an own-gender bias, irrespective of face ethnicity. More importantly, own-race female faces were viewed longer and were better recognized than other-race female faces, whereas these differences were smaller for male faces. However, differences in viewing time could not account for the magnified own-race bias found for female faces.

Taken together, the results of this thesis suggest that neither sex differences in cognitive abilities nor the female own-gender bias result from pubertal maturation or its associated changes in levels of sex hormones. Instead, the reasons for these differences should possibly be sought after earlier in development. With regard to the female own-gender bias, results suggest that this effect is reliable, not affected by divided attention at encoding, associated with increased brain activation in regions specifically involved in face processing, and potentially a result of perceptual expertise.