Early detection of Alzheimer’s disease and dementia in the general population. Results from the Kungsholmen Project 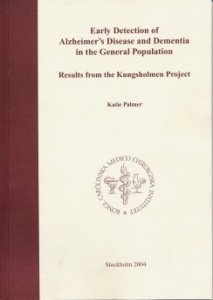 This doctoral thesis investigates early predictors of   Alzheimer’s disease (AD) and dementia in the general population, and verifies   the accuracy of different syndromes of cognitive impairment for predicting progression   to dementia in a dementia-free cohort of 1435 persons aged 75-95 from the Kungsholmen   Project, Stockholm, Sweden. Persons were reexamined after 3 and 6 years to detect   incident cases of dementia and AD (DSM-III-R criteria).

In Study I, the evolution of persons with Cognitive Impairment, No   Dementia (CIND) was explored. CIND was defined as scoring I standard deviation   below age- and education- specific norms on a test of global cognitive functioning.   The evolution was heterogeneous; similar proportions of persons with CIND died,   progressed to dementia, and remained stable or improved. Subjects with CIND   had a 3-fold increased risk of progressing to dementia over 3 years compared   to cognitively intact elderly, and a 2-fold increased risk of death. Individuals   who improved at I’ follow-up did not have a significantly higher risk of later   progressing to dementia than persons who had never been impaired.

In Study II, persons with CIND were more likely to have an anxiety   disorder and symptoms of suspiciousness than cognitively intact elderly.

In Study III, a simple 3-step procedure, analogous to clinical practice,   was evaluated to detect persons who would develop dementia after 3 years. A   high positive predictive value was found; between 88- 100% of persons with memory   complaints (step 1), global cognitive impairment (step 2), and deficits in episodic   memory or verbal fluency (step 3) progressed to dementia over 3 years. However,   the sensitivity of the procedure was poor, as only 18% of persons in the preclinical   stage of dementia exhibited impairment on all 3 measures.

In Study IV, the occurrence and predictivity for dementia of 7 syndromes   of cognitive impairment were examined, including previously proposed criteria   for Mild Cognitive Impairment (MCI) subtypes, and modified versions, which relaxed   the criterion for normal general cognitive functioning. MCI-amnestic was the   least common MCI type, and MCI-single-nonmemory was the most frequent. Modified   criteria increased the occurrence of all MCI subtypes and increased predictivity   of MCIamnestic for future AD. Persons with MCI-multidomains and MCI-amnestic   had significantly increased relative risks for future AD. Original and modified   criteria for MCI subtypes were not able to identify 3.6% of the population who   only have global cognitive deficits, but have a 16-fold risk for AD.

In summary, at the population level, cognitive impairment in nondemented elderly   is a heterogeneous condition, dementia being one of 3 main outcomes. A 3-step   procedure that simulates routine clinical practice can identify with high predictivity   those persons who will progress to dementia, but the sensitivity of this procedure   is low, as less than one fifth of future dementia cases can be identified. Previously   proposed criteria for MCI can detect only half of the persons with cognitive   deficits in the general population, but subtypes of MCI-amnestic and MCI-multidomains   have high predictive power for identifying persons who will develop AD. A simple   modification of the criteria increases the occurrence without diminishing the   predictivity. Furthermore, psychiatric evaluation of persons with MCI can help   to better identify a neurodegenerative progression in syndromes of cognitive   impairment.