Drug use in the elderly: Risk or protection? 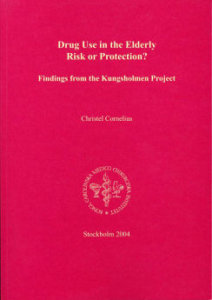 This thesis deals with different aspects of drug use in a population-based study with participants 75 years and older. The study was performed within the Kungsholmen Project in Stockholm, Sweden, using data from the baseline survey (1987-89), and the first (1991-93) and second (1994-96) followups In the first two papers we used cross-sectional data (n=1810) to describe tile drug Ilse pattern ill this population (I), and to examine the association between self-reported symptoms and  drug use (II). In the next papers (III-V) a dementia-free cohort (n=1301) was followed tip to six years to explore the association between the risk of Alzheimer’s disease (AD) and dementia, and the use of aspirin  in and NSAIDs (III), the use of glucocorticoids (IV), -and the use of calcium channel blocker s (V). We also examined whether the apolipoprotein E epsilon 4 (apoE epsilon4)  allele influenced the effect of these drugs (III-V). The main findings are summarized below.

Study I: Sedatives/hypnotics, diuretics, cardiac therapy agents, and minor analgesics and antipyretics were the most commonly used drug groups, accounting for mole than 40% of’ the total medicines used. Women used a larger number of drugs than men (3.4 vs 2.6). Anti-thrombotic agents were the only drug group that men used more than women. People living in sheltered accomoditions used more medicines than those living in own homes or nursing homes. Study II: The most commonly reported symptoms were pain and tiredness. Women reported more symptoms than men. Many of the associations between symptoms and chug use reflected estahlished treatments. However, tiredness, loneliness, and depressed mood were associated with use of anxiolytics and hypnotics/sedatives, which might reflect inappropriate treatment. Study III: An increased risk of Alzheimer’s disease (AD) was seen among aspirin users that did not carry tile apoE epsilon4 allele. A possible protective effect against AD was seen among long-term users of NSAIDs, regardless of apoE epsilon4 status. Study IV: Use of glucocorticoids was associated with a significantly higher risk of dementia in carriers of the apoE epsilon4 allele (RR 2.39, 95% CI 1.02-5.58). Study V: Use of calcium channel blockers did not protect against AD and dementia, regardless of apoE epsilon4 status.

In summary, women used more medicines and reported more symptoms than men did. Self-reported tiredness associated with use of anxiolytics and sedatives/hypnotics might reflect too high or too low doses, or an inappropriate choice of drug. Experience of depressed mood was more common among users of sedatives/hypnotics, which could indicate an under-treatment or inappropriate treatment (if depression in this population. Up to three-years use of NSAIDs might protect against AD, since no one in this group developed AD three years later. The association between aspirin and an increased risk of developing AD among those with no apoE epsilon4 allele Could indicate ,in alternative mechanism of developing AD in this group. Carriers of the apoE epsilon4 allele that used glucocorticoids showed all increased risk of developing dementia, which suggests a possible vulnerability to glucocorticoids ill this group. Finally, although calcium channel blockers have been found to be neuroprotective in many experimental studies, we could not find a protective effect against dementia in this population.