Drug use in the elderly – are quantity and quality compatible 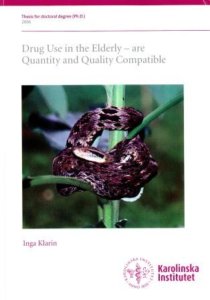 The increasing number of elderly, and the increasing drug use among the elderly, emphasizes the need to continuously monitor drug utilization in this group. The scarcity of randomized controlled trials including elderly people give population-based, observational studies an important role as source of information on drug use and drug-related problems. The aim of this thesis was to explore drug consumption patterns and quality in people aged ≥ 75 years within the Kungsholmen Project, a population-based, longitudinal study 1987-2001. Cross-sectional data from the urban cohort in Kungsholmen, Stockholm and cross-sectional and longitudinal data from the rural cohort in Nordanstig, Hälsingland were used.

Over 90% of the participants used drugs, with a mean of five drugs per person 1999-2001. The pattern was consistent with morbidity patterns in old age. The most common drug classes were cardiovascular drugs, nervous system drugs, and drugs for the alimentary tract and metabolism. Polypharmacy was common, especially among the oldest old. Drug use increased over time, and the utilization patterns were fairly stable regarding drugs for chronic diseases, as opposed to a larger turnover of users of drugs for mainly temporary conditions. Regional differences in the drug use patterns among the oldest old were found.  Vasodilators in cardiac disease  with an odds ratio 95% confidence interval [OR (95% CI)] of 2.51 (1.46-4.30), and high ceiling diuretics 2.62 (1.77-3.90) were used more often, and  Antithrombotic agents  less often 0.43 (0.29-0.65) in the rural area compared to the urban area.

ACE-inhibitors were used by only one fourth of the participants with heart failure (HF) diagnosis in Nordanstig. Crude data suggested an even lower utilization of ACE-inhibitors by demented or cognitively impaired participants with HF, but after adjustment for covariates the significance disappeared. However, advanced age was associated with lower use with an OR (95% CI) of 0.11 (0.01-0.95) for being a user if aged ≥90 compared with 75-79 years, and there was also lower use by those living in institutions compared to community-living: 0.28 (0.09-0.91). Other quality issues were fairly frequent use of calcium channel blockers with negative inotropic effects, and of NSAIDs, practices not recommended in patients with HF.

Conclusions: In this study drug use was extensive, and both drugs for chronic diseases and temporary symptoms were common. Some regional differences were found in prescribing behaviours. Inappropriate drug regiments were also common, increasingly so with number of used drugs. There was an association between IDU and hospitalization in community residing participants, suggesting negative health outcomes of IDU. However, despite the high drug utilization there may also have been under-use of modern HF medications. There is potential to improve drug therapy in elderly people.