Drug use in institutionalized and home-dwelling elderly persons 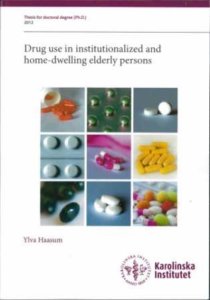 The overall aim of this thesis is to investigate drug use in institutionalized and home- dwelling elderly, with a special focus on dementia. The major findings from the separate studies are summarized below.

Study I. In this register-based study of 1 260 843 home-dwelling and 86 721 institutionalized persons aged ≥65 years, 30% of the institutionalized and 12% of the home-dwelling elderly were exposed to potentially inappropriate drug use (PIDU). Institutionalization was associated with overall PIDU (OR 2.36, 95% CI 2.29-2.44), after adjustment for age, sex and number of drugs (i.e. a proxy for overall co- morbidity).

Study IV. In this nationwide register-based study, we analyzed use of antibiotics commonly used to treat lower urinary tract infection (UTI). We found that use of trimethoprim in institutionalized women was more than twice as common as the recommended level. Also, the use of quinolones, in women treated with UTI antibiotics, was high in women aged 65-79 years (i.e. used by 20% and 21% of institutionalized and home-dwelling women, respectively), which is not in line with the national recommendations. In men, we found that institutionalized men aged ≥80 years were less commonly treated with the recommended drugs (i.e. quinolones and trimethoprim) compared to home-dwelling men in the same age group (74% compared to 83%).

Conclusions: Our results indicate that 1) institutionalization is a potential risk factor for PIDU, 2) although persons with dementia do not receive less analgesics than persons without dementia, they may be inappropriately treated with psychotropics for their pain, 3) persons with dementia are undertreated for osteoporosis, and 4) the treatment recommendations for lower UTI are not adequately followed. In order to improve the quality of drug therapy in older people, time and resources should be allocated to facilitate the implementation of regular medication reviews in this population and the cooperation between different health care professionals should be encouraged.