Diabetes mellitus and the risk of dementia: a population-based study 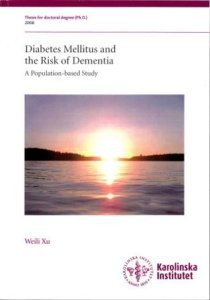 This doctoral thesis investigated the complex relationship between diabetes and the risk of dementia, Alzheimer¡¯s disease (AD) and vascular dementia (VaD), and examined the effect of borderline diabetes on the risk of dementia and AD. The data of this thesis were derived from the Kungsholmen Project (Studies I, II, and III) and from the HARMONY Study (Study IV). The Kungsholmen Project is a community-based prospective study on aging and dementia in people aged ¡Ý75 years in Stockholm, Sweden. The HARMONY Study is a study on dementia in a population-based Swedish twin cohort aged ¡Ý65 years. The major findings are summarized below. Study I. The relationship between diabetes and dementia, AD and VaD was investigated using 6-year follow-up data. Diabetes was associated with hazard ratios (HRs) of 1.5 (95% CI, 1.0-2.1) for dementia, 2.6 (95% CI, 1.2-6.1) for VaD, and 1.3 (95% CI, 0.9-2.1) for AD after adjustment for vascular disease and other potential confounders. There were joint effects of diabetes and severe systolic hypertension (SBP ¡Ý180 mm Hg) on AD and VaD, and of diabetes and heart disease on VaD. Study II. The hypothesis that borderline diabetes may increase the risk of dementia and AD was verified using 9-year follow-up data. Borderline diabetes (random blood glucose: 7.8-11.0 mmol/l) was associated with an increased risk of dementia (HR 1.7; 95% CI, 1.0-2.7) and AD (HR 1.8; 95% CI, 1.1-2.9); the risk effect was independent of vascular disease and future development of diabetes. Borderline diabetes may interact with severe systolic hypertension to multiply the risk of AD. Study III. The relation of diabetes to AD was clarified by examining the role of glycemic control and vascular comorbidities. Diabetes in general was only related to VaD (HR 3.2; 95% CI, 1.2-8.6), but undiagnosed diabetes led to HRs of 3.4 (95% CI, 1.5-7.7) for dementia, and 3.3 (95% CI, 1.2-9.0) for AD. Borderline and undiagnosed diabetes were further related to pure AD. Diabetic patients with random blood glucose level< 11.0 mmol/l showed no increased dementia risk. Study IV. The association between diabetes and an increased risk of dementia, AD and VaD was confirmed in twins. Diabetes was associated with adjusted ORs (odds ratios) of 1.9 (95% CI, 1.5-2.4) for dementia, 1.7 (95% CI, 1.2-2.4) for AD, and 2.2 (95% CI, 1.4-3.5) for VaD. The risk effect was stronger in patients with diabetes onset at midlife than in patients with diabetes onset in late life. Paired analysis showed that genetic and environmental factors in early life might account for the association between late life diabetes and dementia, but could not explain the midlife diabetes-dementia association. Conclusions. Diabetes increases the risk of dementia, AD and VaD in the elderly. The risk of dementia is very high when diabetes occurs together with severe systolic hypertension and heart disease. Even borderline diabetes is associated with an increased risk of dementia and AD. The risk of dementia is stronger when diabetes occurs in midlife rather than late life. However, good control of blood glucose may reduce the risk of dementia due to diabetes. These findings support the growing evidence of a link between glucose dysregulation and vascular damage and neurodegenerative changes in the brain. Finally, genetic and early life environmental factors, and adulthood environments may be implicated in the development of the diabetes-dementia association.