Diabetes and cognitive functioning: the role of age and comorbidity 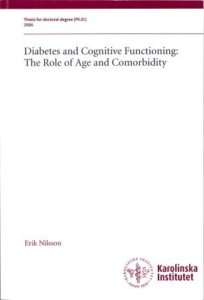 This thesis deals with the influence of type 2 diabetes on cognitive function in adulthood and very old age. The effects of diabetes are studied both in populations free from dementia, and in a clinical Alzheimer’s disease population. For Studies 1 & 11, a non-demented, non-depressed, sample of very old (>75 years of age) persons from the Kungsholmen Project in Stockholm, Sweden, was used. For Study Ill, data from the Betula prospective cohort study were employed. All selected participants (age-range 35 – 85 years) were non-demented at baseline, and did riot develop dementia within ten years of cognitive assessment. For Study IV, a clinical sample, from the Massachusetts Alzheimer’s Disease Research Center, of persons diagnosed with probable Alzheimer’s disease (PRAD) was used. The main findings are summarized below.
Study I: The mini-mental state examination (MMSE) scores of 408 subjects (non-diabetics, n=356; diabetics, n=36) were examined. Total MMSE scores were significantly (p=.041) lower in diabetics than non-diabetics after controlling for demographics and cardiovascular disease (CVD). The scores in the subtests attention and calculation and copy a design were most highly related to diabetic status (p=.009, and p=.031, respectively). Among diabetics , a significant (p=.03) correlation between random blood glucose level and total MMSE score was observed. Among non-diabetics, the same correlation was riot statistically significant.
Study II: Data from tests of episodic memory and verbal fluency among 338 subjects (non-diabetics, n=307; diabetics, n=31) were analyzed. In both types of tests, level of semantic support was varied. Diabetics performed significantly worse on tests with low cognitive support (free recall of random words, p=.048; letter fluency, p=.011 after control for demographics, CVD, and signs of CVD. No statistically significant difference between diabetics and non-diabetics was observed in tests with high level of cognitive support (cued recall of organizable words, category fluency). When controlling for impending death and preclinical dementia, only letter fluency remained significantly (p=.033) related to diabetes status.
Study III: Performance on tests of episodic memory with varying levels of support at encoding and retrieval in 2,765 non-demented subjects who would not develop dementia within 10 years (nondiabetics with normal levels of HbA1C, n=2,489; non-diabetics with elevated levels of HbA1C, n= 151; diabetics, n=125) were analyzed. When the whole age-range was studied, diabetics performed at a lower level, than the two non-diabetic groups on an overall composite score of the cognitive tests (p=.017). Among persons 35 – 65 years of age, those with diabetes performed at a slightly lower level than persons with elevated HbA1C (p=.047), and at a lower level than the non-diabetic controls (p=.008). Among persons 70 – 85 years of age, non-diabetics with elevated levels of HbA1C performed at a slightly lower level than diabetics (ns) and at a significantly lower level than nondiabetics with normal levels of HbA1C (p=.001). High levels of cognitive support attenuated differences between groups, and high retrieval support resulted in the largest decrease of performance differences.
Study IV: Data on global cognitive performance (Blessed dementia scale; BDS) and activities of daily living (ADL) in a clinical population (total, n=693; non-diabetics, n=647; diabetics, n=46) of PRADpatients were analyzed. Patients had been assessed with regard to ADL and BDS between 2 and 24 times during a period of 4.5 months to 12 years. Power analyses indicated good power (0.75) to detect small effect sizes. Hierarchical linear modeling (FILM) analyses were performed. No difference in rates of cognitive or functional decline between diabetics and non-diabetics were detected.
In summary, non-demented diabetics performed at lower levels in tests of cognition than nondiabetics, both in an adult (35 – 85 years of age) and in a very old (75 – 96 years of age) population. Differences between diabetics and non-diabetics were smaller in subjects with preclinical dementia or impending death, and undetectable in subjects with PRAD. In general, persons with elevated HbA1C in the absence of a diabetes diagnosis performed at an intermediary level compared to diabetics and non-diabetics. In persons 70 years of age or older, however, persons with elevated HbA1C in the absence of a diabetes diagnosis performed at a lower level than diagnosed diabetics. This finding is discussed in relation to underdiagnosis of diabetes in the elderly population. Cognitive support, Finally, attenuated differences between diabetic and non-diabetic groups.
ISBN: 91-7140-759-6
© Erik Nilsson, 2006