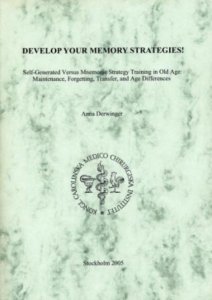 The general aim of this thesis was to further our understanding of episodic   memory plasticity in normal aging, by examining the effectiveness of a mnemonic-strategy   training program versus a self-generated memory strategy training program in   healthy adults between 20 and 90 years old, using numeric materials. The effectiveness   of training was evaluated in terms of immediate gains, transfer of skill, maintenance   of skill, and forgetting of learned information. The thesis also addressed age   differences in memory plasticity.

Study I compared two different memory-training approaches: Memory   training with a classic mnemonic strategy (the number-consonant mnemonic) versus   self-generated memory strategies in healthy older adults. The findings demonstrated   intervention-related gains in both training groups. The magnitude of improvement   increased in both groups when cognitive support was provided. Transfer of skills   to tasks not encountered during training was not demonstrated.

Study II examined maintenance of skills   following these two forms of training: mnemonic and self-generated. This was   accomplished by reassessing participants from Study 1 eight months after completion   of training. The results demonstrate maintenance effects for both training groups   over the eight months follow-up period under supported task conditions. However,   when cognitive support was withdrawn, recall performance for the mnemonic group   decreased over time, whereas performance for the self-generated strategy group   was not affected negatively.

Study IV examined adult age differences in episodic   memory plasticity, with regard to overall gains as well as gains across trials   as a function of training and cognitive support. Transfer of skills to tasks   not encountered during training was also analysed. Results reveal age-limits   in memory plasticity on several fronts. First, reductions of plasticity were   not only evident between groups of young and older adults, but also within the   group of older adults, showing that limits to plasticity were especially marked   in very-old age. Further, age differences were not reduced under highly supported   task conditions (more trials or verbal cues). Also, young adults exhibited greater   transfer of skill in tasks not trained.

In summary, healthy older adults have a cognitive   reserve capacity that can be elicited through memory training, and that self-generated   strategy training might result in more durable effects compared to mnemonic   training in old age. In planning memory interventions, age-differences in episodic   memory plasticity and issues of cognitive support also need to be considered.